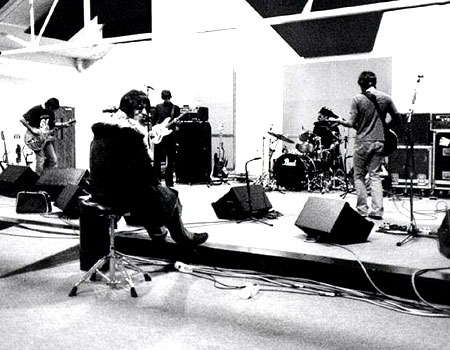 The newly refurbished Farmers Arms in Burnage is launching a new bar in honour of local supergroup ‘Oasis.’ The aptly named ‘Oasis Music lounge’ will be staging a four day Oasis festival to coincide with the bands homecoming open air gigs at Heaton Park.

The Festival features an exhibition of ‘Oasis’ photographs by rock photographer Karen McBride taken at their last open air gigs at the City Of Manchester stadium. It also features a collection of Oasis memorabilia in the newly opened lounge dedicated to the band. The festival kicks off on Thursday 4 June and runs until Sunday 7 June.

Lawrence Hennigan the owner of the bar said “We are really looking forward to opening up the new music lounge in time for the return of Burnage’s Prodigal sons. The response from the general public has been overwhelming since we first decided to create the special lounge. Fans have been emailing us from all over the UK asking for details and offering to donate items. After we have the music lounge finished we are looking into the possibility of an Oasis Museum in the stables at the rear of the property.”

“One of the items we had donated was a photograph of Liam’s former football team at St Bernard’s Primary School. It would be great if we could trace his former team mates for a possible charity match. We are still looking for a photograph of Liam when he played for the Farmer’s.”

The bar is hoping to start a monthly new music night to support local bands and solo acts who want to be the next supergroup to come out of Burnage. For further details about the bar or the new music night email [email protected]